In 2013, I started feeling scared for the effects of climate change on the world I love. I wanted to know if others were feeling that way too; to build a way for us to talk about it together; and to have those feelings and conversations lead to action.

The first round of Climate Anxiety Counseling ran in Kennedy Plaza (outside Burnside Park), Tuesday-Friday 3-6 pm, Saturday 3-5 pm, May 13th-June 7th, 2014. Opposite the bus terminal, and just outside Burnside Park, I sat with a Lucy-from-Peanuts style booth (thank you, Charles Schulz):

When people stop to talk with me, I ask them what they’re most worried about — whether it’s related to climate change or to something else — and if I can write down what they say. I listen, ask questions to help them figure out what they feel and what they want to do about it, and sometimes suggest a course of action. With permission, I’ve shared on this site some of what people said to me.

If you come to the booth, you can share your anxiety–climate or otherwise–with me. You can also take away a little drawing of a living creature that shares the world with you. I’ve since set up the booth at AS220’s Foo Fest, the Washington County Fair, the Sankofa World Market, the Sustain PVD Fair, PVDFest, the Miantonomi Farmers’ Market, the Lakeville Farmers’ Market and more. I worked with the Cranston Health Equity Zone to gather residents’ stories of climate anxiety, other anxiety, and climate disruption.  And I’m now writing a book about how to live in climate change with purpose and care, and to turn our climate anxiety (and anger, frustration, numbness…) into connection and action. NEXT MORNING ON EARTH will be out with Hachette Go in 2024. If you’d like a taste of what the book will offer, as well as updates, climate action search terms, and readings to help you think, feel and connect, please sign up for my newsletter, which you’ll get once a week.

Two exercises of the kind that form the backbone of NEXT MORNING ON EARTH appeared at Woodland Pattern. A related essay, “Strange Waters,” ran in The Rumpus, and another, “The Alchemists at Home: On Pregnancy and Responsibility” in The Toast; I wrote a kind of timely introduction to the project, “One Person at a Time,” for Catapult, who also published a reflection “On Political Change, Climate Change, and the Choice to Not Have Children.” “Time To Be Something Other Than Human,” a long essay informed by my time at the booth and reflecting on the power and limits of stories in the context of climate change came out in 2018 with Essay Press. Some poems I wrote between conversations are in Dusie and Poets for Living Waters.

Haley Barndollar and Alex Kuffner wrote about the booth for USA Today, in the context of rising levels of climate anxiety. Stephanne Taylor wrote about it for Hakai Magazine. Karl Saliter wrote about it in Elephant; Martin Fritz Huber mentioned it in Outside; it’s part of an article by Martin de Bourmont and Dayton Martindale for In These Times. Linda Russo and I talked about it in Coldfront. ARTCOP21 included it in their map of events. Bethany Nowviskie and Jeremy Deaton put it into two different contexts. Three of the Alternate Histories appeared in About Place. and three appeared in Reckoning, where editor Michael J. DeLuca also interviewed me (and then later, I interviewed him). And other people have adapted the booth for their own communities. 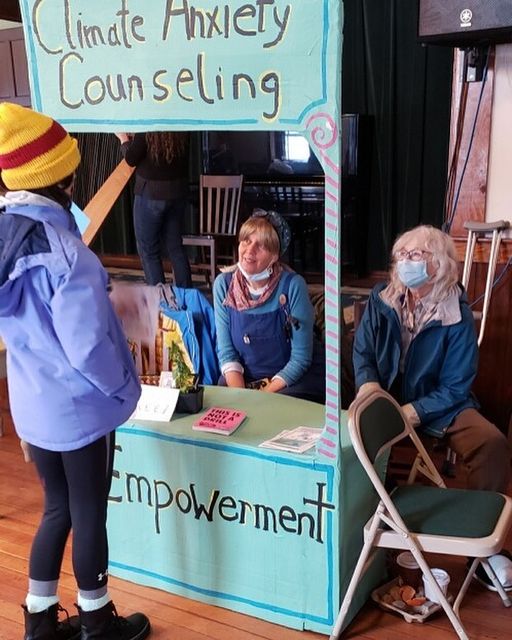 For updates on booth activities, as well as links to opportunities for climate action, follow me on Twitter @kateschapira. If you have a question for me, you can ask me there, or use this contact form. In the meantime, let’s take care of each other.